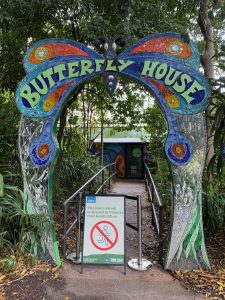 In 2011 the girls and I accompanied my husband on a business trip to Port Douglas. I know—a tough gig, right?

One of the many highlights was visiting the Australian Butterfly Sanctuary in Kuranda. It was there we learned that when butterflies are in the stage of metamorphosis they are referred to as a chrysalis. We also learned some rather gruesome details about what takes place during this stage. Basically, enzymes are released that digest most of the caterpillar’s cells such that it turns into a kind of caterpillar soup. Then the undigested cells – cells that are like stem cells or building blocks – grow into the various parts of the the future butterfly.

When you think about caterpillars and butterflies it kind of makes sense. Caterpillars are soft and squishy and spend their whole lives eating leaves, while butterflies could almost be a different species altogether as they dine on nectar and flutter around using wings of exquisite beauty. Such a dramatic change requires a dramatic transformation.

I was reminded of this while at the zoo earlier this week. Usually we like to wander through the Butterfly House where you can see caterpillars and butterflies in various stages of growth. But this time, due to the COVID-19 restrictions, the Butterfly House was closed.

This was the same day that the Victorian Government announced that we would be going back to Stage 3 Stay at Home restrictions for six weeks in metropolitan Melbourne.

It may well feel like we are about to become a chrysalis for the next six weeks, and everything that we value is going to collapse into some kind of mushy soup. But within that soup we need to cling to the elements that remain and will strengthen to become the building blocks of who we will be when we emerge.

In 1 Corinthians 13:13 Paul tells us that there are three things that last forever: faith, hope and love. Throughout the next Stay at Home season I pray that these will be your building blocks. Faith in a God who is all-present and all-knowing, hope in a future where His kingdom will come and an unending love that is both given and received in abundance.